Jamie Bell was born to his parents, Andrew James Matfin Bell, in Mach 1986. He is a dancer and famous actor who came to the limelight after appearing in Billy Elliot in 2000. Jamie won the BAFTA Award for his outstanding performances, joining the league of youngest Bafta Award winners.

In 2017, he acted in the movie Film Stars Don’t Die in Liverpool, which earned him another Bafta Award for his performance. In the drama series  Turn: Washington’s Spies in 2014-2017, he acted as Abraham Woodhill.

Jamie was born in England. Before Bell was born, his dad, John Bell, left his mother, Eileen Matfin. His mother and sister, Kathryn, raised and saw him through school. He started dancing after following his sister Kathryn in her ballet classes.

The producers of a movie industry selected Jamie out of 2,000 boys to play the role of Billy Elliot, a young boy who dismayed his widowed dad by attending ballet classes. Bell’s performance was outstanding in the movie, making him receive awards at 14.

Since then, he has appeared in other well-known films such as King Kong and Fantastic Four. In addition to his work on the silver screen, Bell has also had a successful career in TV series such as The Adventures of Tintin and Turn: Washington’s Spies in 2014-2017; he acted as Abraham Woodhill.

In 2001, Jamie acted as Jury President at the Giffoni Film Festival. The following year, he worked as a deformed servant in an adaptation of Charles Dickens’s book Nicholas Nickleby and a young soldier in Deathwatch. Subsequently, Bell played the role of a young man on the run in the film Undertow.

He also acted as a Southern California teenager who was disaffected in the film The Chumscrubber and as a pacifist in the movie Dear Wendy, in which Jamie played the role of Jimmy. In 2005, Bell starred alongside his ex-wife Evan Rachel Wood in the music video directed by Samuel Bayer, “Wake Me Up When September Ends.”

Jamie acted as the titled character in the drama Hallam Foe. After playing the role, fans nominated him for the British Independent Film Awards as Best Actor. After which, Bell acted in Lonelygirl15. In 2008, Paramount Pictures released two films: Defiance and Jumper.

In the first film, he played the role of Asael Bielski, leader of a supporter group that rescued 1,200 people during the Holocaust. He acted alongside Daniel Craig and Andy Serkis, who are also famous movie stars. Movie producers publicly declared that Jamie would play a role in the movie The Adventures of Tintin.

The company released the film in 2011. Jamie also acted in The Eagle as Jane Eyre and Esca. Then in 2013, he appeared in Filth together with James McAvoy and appeared in Snowpiercer as Edgar. 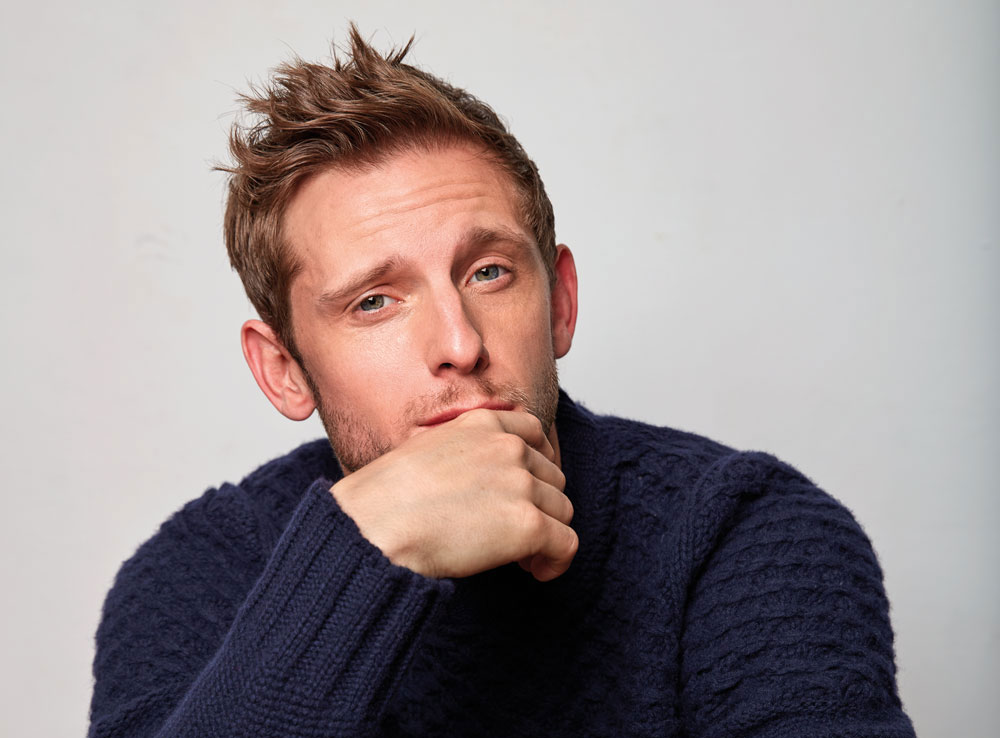 In 2005, Jamie met a famous American actress Evan Rachel Wood who he met at the Sundance festival. Although the duo first met while shooting the music video for “Wake me up when September ends.” They were so much in love with each other and started dating in 2011.

In 2011, they fanned the flames of their relationship and married in October 2012, and together they had a son in 2013. Sadly the couple separated in 2014, just two years after the wedding. Bell met Kate Mara on the set of Fantastic Four.

Who is Evan Rachel Wood

ERW was born in September 1987. She is a famous American singer, activist, actress, and model. Wood has received many awards and nominations for her outstanding performance in her filming and Television shows. Wood started acting from a young age and has appeared in TV series like Once and Again and American Gothic.

At age nine, she became a leading actress in Digging to China. Fans nominated her for Golden Globe Award after, she played the role of a troublesome teenager in the teen film Thirteen in 2003. After which, she acted in independent movies like Down in the Valley, Across the Universe, Pretty Persuasion, and Running with Scissors.

She was born in North Carolina to famous parents. Her mom, Sara Lynn Moore, is an acting coach, director, and actress who trained her daughter in the Jewish faith but converted to Judaism. Ira David Wood, Wood’s dad, is a shyer, actor, playwright, and theater director who is the director of a local theatre company, Theatre in the Park.

Although she left the public school for homeschool, she went to Cary Elementary School in North Carolina as her schoolmates constantly bullied her. She went to high school and finished at 15. When her parents separated in 1996, she followed her mom to Los Angeles. Her parents later divorced in 2002.

In 2009, she played the role of a young wife in Whatever Works, although she regretted taking the position and then decided not to work with the produced again. In the same year, her brother made a fundraising performance of Romeo and Juliet at her father’s theatre company. Wood played the role of Juliet.

The producers suspended the filming when Wood became pregnant. However, they resumed in 2013. Although Wood had left the production, she said the production company paid her nothing more than 300k, as they could no longer pay her a higher sum.

In response to her, the company sued her for $30 million. They could not resolve the dispute, so the company halted the filming.

Evans Wood recorded a song in 2012, “All Is Found.” She also sang a duet song, “Show Yourself,” with Idina Mendel from the soundtrack of Frozen in 2019.

Wood mentioned in 2012 that she believes in God. However, she is not a religious person. She also said that her definition of God is not in any realign but a personal one. After Kobe Bryant died in 2020, Wood posted a message on Twitter describing Bryant as a rapist.

So many people criticized Wood for her comment. A few weeks after, Wood deactivated her Twitter account. Wood told a reporter that her lovers had raped her twice. She testified before the California Senate to pass the phoenix Act.

She said her ex-lover Marilyn Manson abused her sexually, physically, and emotionally, including antisemitism, resulting in the doctors constantly diagnosing her with complex post-traumatic stress disorder.

Four different women also made allegations against Marilyn of sexual assault, while sixteen have accused him of violence.

Kate Rooney Mara, a famous actress, was born on 27 February 1983. She is an American actress famous for her role as a computer analyst in 24 and an offended mistress in Murder House. She also acted as Patty Borres in season one of Pose and as a teenager in A Teacher.

After performing in A Teacher, fans nominated her for Best New scripted series. Kate picked interest in acting from nine, although in a school musical. She went to Fox Lane High School, and after graduation, she moved to Tisch School of Arts, where she studied musical theater.

In 1997, Mara got her first role in Law and Order. After which, she played roles in the Special Victims Unit, Ed and Madigan Men. In 2003, she played two roles in Everwood as Kate, a teenager and then aborted. She has also appeared in many movies, including Prodigy, The Landscape of the Body, Random Hearts, and many other films.

In a 2004 movie, The WB pilot, Kate was cast as the lead. After that, she played the role of a computer analyst in the TV series 2006, 24. She also joined the actors of Entourage in 2009—Kate guest-starred as Hayden in the series American Horror Story.

Hayden was a student who became Dr. Ben’s dead mistress and also a trapped spirit in his house. Ryan Murphy, Kate’s former producer, offered her the role. Kate played the role of Zoe Barnes in House of Cards in 2013.

Zoe was a reporter who became an ally of Frank Underwood, feeding him with stories that defied his rivals. In 2014, Kate filmed season two of the series, which they released in February 2014. Fans nominated her for Primetime Emmy Award for Outstanding Guest Actress in a Drama Series.

Mara and her co-star Jamie Bell started dating in 2015, and he engaged her in 2017. They are still together to date.

On Facebook, she has more than 223k followers @officialkatemara.

Jamie Bell’s outstanding skills and talents in acting have earned him a whooping sum of $11 million. At the same time, his ex-wife, Rachel Wood, a multi-talented actress in so many famous movies, has $10 million as her net worth.

His present wife, Kate Rooney Mara, is also an excellent actress who was Jamie’s co-star in Fantastic Four. She has amassed a net worth of $14 million.

Jamie Bell is an excellent dancer and actor who can be likened to legends like Daniel Craig in James Bond. Bell is storming the media, and fans are speculating that Jamie might play the role of James Bond in upcoming functions. This sexy-looking young champ has performed in so many film projects.

–Why was Steven Crowder banned from YouTube for one week?
–Who is Katie Kimmel, Jimmy Kimmel’s Daughter?
–A glimpse into Britney Spears’s wedding planning.