Terry Flenory (Southwest T) is a convicted drug trafficker and an active Black Mafia Family (BMF) member. If you haven’t heard about the BMF, you are in the right place right. All information you need about Terry, his brother (Big Meech), and their organization is right here.

The duo was arrested in 2005 and convicted in 2007. Although, in 2020, Terry was released from jail and was confined at home due to the pandemic that broke out. Meech is still in prison, serving his sentence.

Demetrius Flenory (also called Big Meech) was born on 21 June 1968, whereas Terry Lee Flenory (Southwest T) was born on 10 January 1970 in Michigan. The brothers began selling contraband in Detroit when they were still in High School. In 2000, they had established an organization that sells and distributes contraband in the US states like North Carolina, Florida, California, Alabama, Missouri, Tennessee, Mississippi, and Ohio. An investigation of their organization estimated its membership nationwide as more than 500.

Black Mafia Family (BMF) is an organization founded by Demetrius, also known as Big Meech, and his brother, Terry Flenory, also known as Southwest T. BMF is a money laundering and drug trafficking organization. The Drug Enforcement Agency (DEA) claims to have dismantled it in 2005. In 2000, they established the sales and distribution of contraband through their sources in Los Angeles. They also had a direct link with Mexican drug cartels. The organization had two hubs: one in Los Angeles to handle incoming shipments from Mexico, headed by Terry Flenory, and distribution run by Demetrius Flenory.

They also established a hip-hop music brand in the early 2000s known as BMF Entertainment as a cover to disguise their main illegal business. It was also an attempt to create a legal firm and source of income when inquisitions began. The entertainment business promoted famous artists like Jay-Z, Diddy, Trina, Fabolous, Shawty Lo, T.I., etc., but Bleu DaVinci was their sole artist. 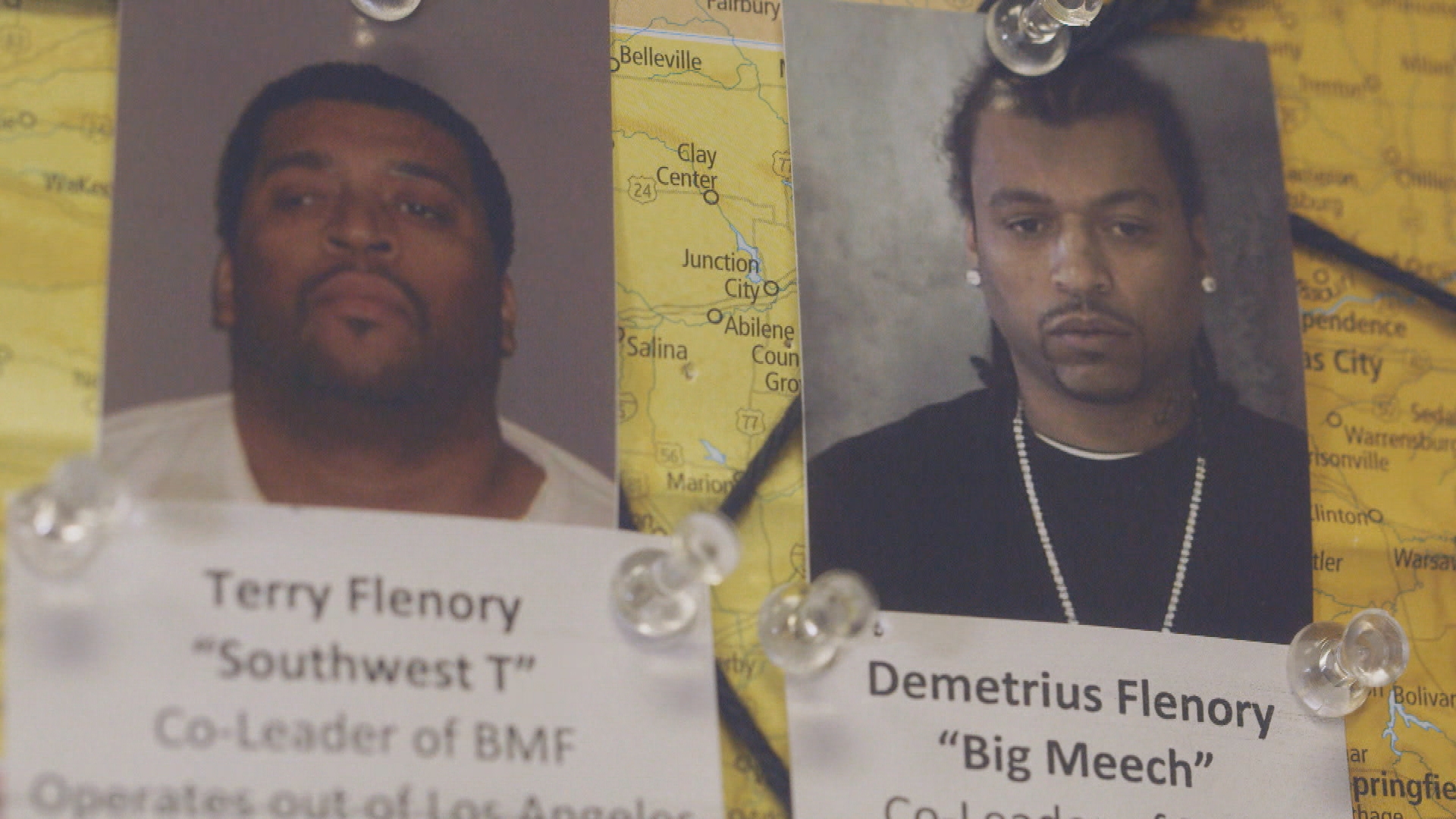 The brothers began selling illegal substances in Detroit when they were in High School. By 2000, they had an organization that sells and distributes contraband in the US. The duo ran operations in states like North Carolina, Florida, California, Alabama, Missouri, Tennessee, Mississippi, and Ohio. Authorities estimated that about 500 people were members of the Black Mafia Family.

In 2003, the two brothers began to have issues, which affected the organization. Terry had to relocate to Los Angeles to lead his organization while Demetrius remained in Atlanta, where distribution took place. The bad blood grew so intense that the communication between them reduced immensely. In a discussion captured on a wiretap by DEA, Terry was worried because his brother Demetrius was living an extravagant lifestyle, partying around, which would bring the wrong attention to them, which could, in turn, ruin them. Within five months, the government had 900 pages of typed transcripts of wiretapped conversations from Terry’s phone and filed charges against them.

In 2007, the duo pleaded guilty to the charges filed against them, and in 2008, the judge sentenced them to 30 years imprisonment for operating a drug-trafficking business that spanned from 2000-to 2005. While Demetrius is serving his sentence in Federal Correctional Institution, Sheridan, Terry was released in May 2020, during the covid-19 pandemic. He was granted a compassionate release due to health reasons, and the government was making an effort to reduce the spread of covid-19 among inmates. Although Demetrius also sought his release following the same guideline, the judge rejected the application for release due to his prison record, which suggested that he had not changed much. For example, he was still allegedly promoting himself as a king in the contraband industry. The prison records also stated that the prison warder caught Demetrius with a phone, weapons, and illegal drugs.

How did the government stop them?

A wiretapped conversation from a drug dealer in Atlanta led the task force to an amateur dealer Decarlo Hoskins. Hoskins disclosed that he knew two brothers – Omari McCree and Jeffrey Leahr – he grew up with who are also active members of the BMF and regularly supplied a large quantity of contraband. The wiretap further disclosed that Omari McCree got preferential treatment from Demetrius because he was a high-level distributor. In 2004, enforcement agents pulled over Jeffrey Leahr and his girlfriend. They found a bag containing 10kg of contraband with them; although Jeffrey and his girlfriend were later released, they got into massive debt due to the cocaine lost to the enforcement agents and went on the run.

During the different trials, witnesses gave various testimonies; some said that BMF operated in five houses in Atlanta and sent out 100-150kg of well-packaged contraband every 10 days in separate compartments in a vehicle to locations where paid workers would unpack and store them. Then, buyers would make arrangements to pick up their orders via calls. They alleged that individuals made payments on delivery with a kg costing as high as $20k. After delivering ‘goods’ to the customers, the proceeds from the business would be packaged in a vehicle and sent back to the supply sources.

According to testimonies, the workers had different duties; while some counted cash, others packaged the illegal substance. Some members even helped collect the drugs at various airports.

In October 2005, the DEA carried out an intense drug raid leading to the arrest of 30 alleged BMF members and seizure of 2.5kg contraband, $3 million in cash and assets, and weapons.

Before the raid mentioned above, agents had picked up about 17 members of the organization and seized 632kg of cocaine, $5.7 million in assets, and $5.3 million (cash).

The DEA captured Demetrius in a suburb outside Dallas, and they found marijuana and a few MDMA pills on him. In addition, they found several weapons and many vehicles. Agents arrested Terry in St. Louis, and there were marijuana, guns, and several other occupants with him.

In July 2007, the government charged 16 members of the BMF in Atlanta for conspiracy in drug distribution. The charge carried a mandatory minimum sentence of 10 years imprisonment and a maximum of life imprisonment, alongside a $4 million fine. While all defendants pleaded guilty to the charge, only one person didn’t; his name was Fleming Daniels.

Fleming Daniels, a top member of the Black Mafia Family, was eventually sentenced to 20 years imprisonment on 17 December 2008 for drug trafficking. The judge further fined him $10k for partaking in violent group activities. Although enforcement agencies did not see him with weapons or illegal substances, the prosecution relied on the testimony against him by William Doc Marshall and Ralph Simms. The witnesses said they had seen him several times receiving drugs in kilograms. Daniel also got convicted for the murder of one Rashannibal Drummond. Faced with these damning charges, he pleaded guilty and was sentenced to 20 years imprisonment for manslaughter, after which he will serve another 20 years for his involvement with the BMF family.

Blew Da Vinci, the rapper and sole artist of BMF Entertainment, was sentenced to five years and four months imprisonment on 30 October 2008. He denied knowing that his record label was involved in illegal substance cocaine from the beginning; he told the enforcement agencies that Flenory only presented the music aspect of the company, not until much later that Flenory introduced the illegal side of the business. He was released in 2011 and went back to his music career.

The DEA arrested the last suspect, Vernon Marcus Coleman, on 17 July 2009, with enough illegal substance that tied him to the intention to distribute.

As of 2015, all well-known BMF members had been arrested by the DEA. Although the federal government and the general public believe that these were not all of the BMF family, they claim they were the key figures running the organization.

Documentaries on the BMF

There are several TV shows and documentaries on the Black Mafia Family. 50 Cents did the most recent show of the organization, titled BMF, and it combines illegal substance dealing/money laundering with family drama. The play attempts to tell the story of the happenings in the BMF Entertainment industry and the several artists they promoted using their influence. When 50 Cents heard the good news of Terry Flenory’s homecoming, he got so excited and took the information to his Instagram news feed.

A documentary about the BMF organization, BMF: The Rise and Fall of a Hip-Hop Drug Empire, was published in 2012. It gave a great depth of knowledge into the organization’s modus operandi.

Southwest T’s former girlfriend, Tonessa Toni Welch, popularly known as Welch, was born in Detroit to a middle-class family. She fell in love with Southwest T, and at age 19, she was living an extravagant lifestyle with the criminal brothers. However, when their empire crumbled, she went down with it as well. She was convicted and also sentenced to more than four years imprisonment. According to her, it was her worst nightmare ever. As she was always high on substances, it took her time to realize that she lived a worthless life when she was in prison. Welch also mentioned that when reality dawned on her, she felt like crap; the experience was unbelievable to her, but lo and behold, she had lived the high life and was now in prison. She was eventually set free in 2012. When she got out of jail, she was grateful for the prison experience cause, according to her, it changed her and made her a responsible person.

Her first job in prison was in the chapel, and she felt connected to a spiritual being. Currently, she works in prison reform and has seemingly dedicated her life to helping others in the same shoes as she was.

There is no information about Big Meech’s girlfriend or wife.

Terry is active on Instagram with the username @Southwest263. He has 248k followers and posts updates about his life on IG page.

Terry Lee Flenory or Southwest T allegedly has a net worth of between $30million and $40million. Some sources claim that he made this money from his illegal business and the entertainment industry. Meanwhile, Big Meech’s net worth in 2022 is estimated to be $100 million, although we cannot confirm these claims from reputable sources.

Former drug dealer Terry Flenory appears to have mended his ways while in prison, and when he was granted freedom from prison, he has decided to live a beautiful life. After spending more than a decade in prison, he enjoys a decent life in the US with his family.

Terry Lee Flenory, aka Southwest T, has lived a life indeed. Having lived the life of a drug trafficker, jailed, and was released, he decided to turn a new leaf. It appears that he was able to keep some of his illegally made wealth.

Also, read our latest articles:
–10 home remedies that can help you get rid of bad breath
–These are the songs getting me through this week
–Roundup of the week- Davido’s orphanage donation, Teen Wolf Movie, Kanye West’s IG outbursts, and more.