Skip to content
Home » Celebrity Biography » Who is John McAfee’s Wife? Everything you need to know about Janice Dyson Janice Dyson, born in 1983, is popularly known as the wife of a late technology mogul and founder of the McAfee antivirus, John McAfee. She worked as an escort before getting married to McAfee in 2013. However, the authorities arrested her husband in Barcelona on criminal tax evasion charges. Spain’s National Court approved the order to send him back to the United States.

Janice Dyson was born to her parents in 1983 in Guatemala. There is no information about her childhood and Education. Also, information regarding her past life, parents, and academic background is not in the media yet. She later lived in Florida, where she worked squarely as a sex worker.

–Amiri King: Bio, Net Worth, His breakup with Sara Ruminski and More….
–Who is Nicole Covone, Lil Durk’s Ex-wife? Achievements and Personal Life–
Everything you need to know about Sonja Morgan’s Ex-Husband, John Adams Morgan.

Just as there aren’t any records about Janice’s academic qualifications, there also isn’t any detail telling of her serving in any organization. Janice happens to be a victim of human trafficking, and she worked as an escort in South Beach, Florida, before she met her husband McAfee, who she said saved her from sexual slavery and human trafficking.

Her husband, John McAfee, was a British-American computer programmer and a businessman. Furthermore, he unsuccessfully pursued the Libertarian Party nomination for president of the United States twice. First time in 2016 and the second time in 2020. In 1987, he wrote the first commercial antivirus software and founded McAfee Associates to trade his creation.

Janice McAfee and her husband, John McAfee, married in 2013. Janice and John met in 2012 when they were exiting Guatemala on the run away from murder accusations. John picked her up from Miami Beach and hired her as an escort for the day and night. Fortunately, that day and night they spent together turned out to be the special ones for the duo, and they developed an instant relationship and got along very well. They started courting that year and later tied the knot in 2013. They lived in Lexington, Tennessee.

The age difference between Janice and John is about 37 years. Janice Dyson is 39 years old as of 2022. However, her husband McAfee was 75 years old before his demise. He was born in 1945 and used to celebrate his birth anniversary on 18 September every year. Janice always saw John as always disarmingly lovely. 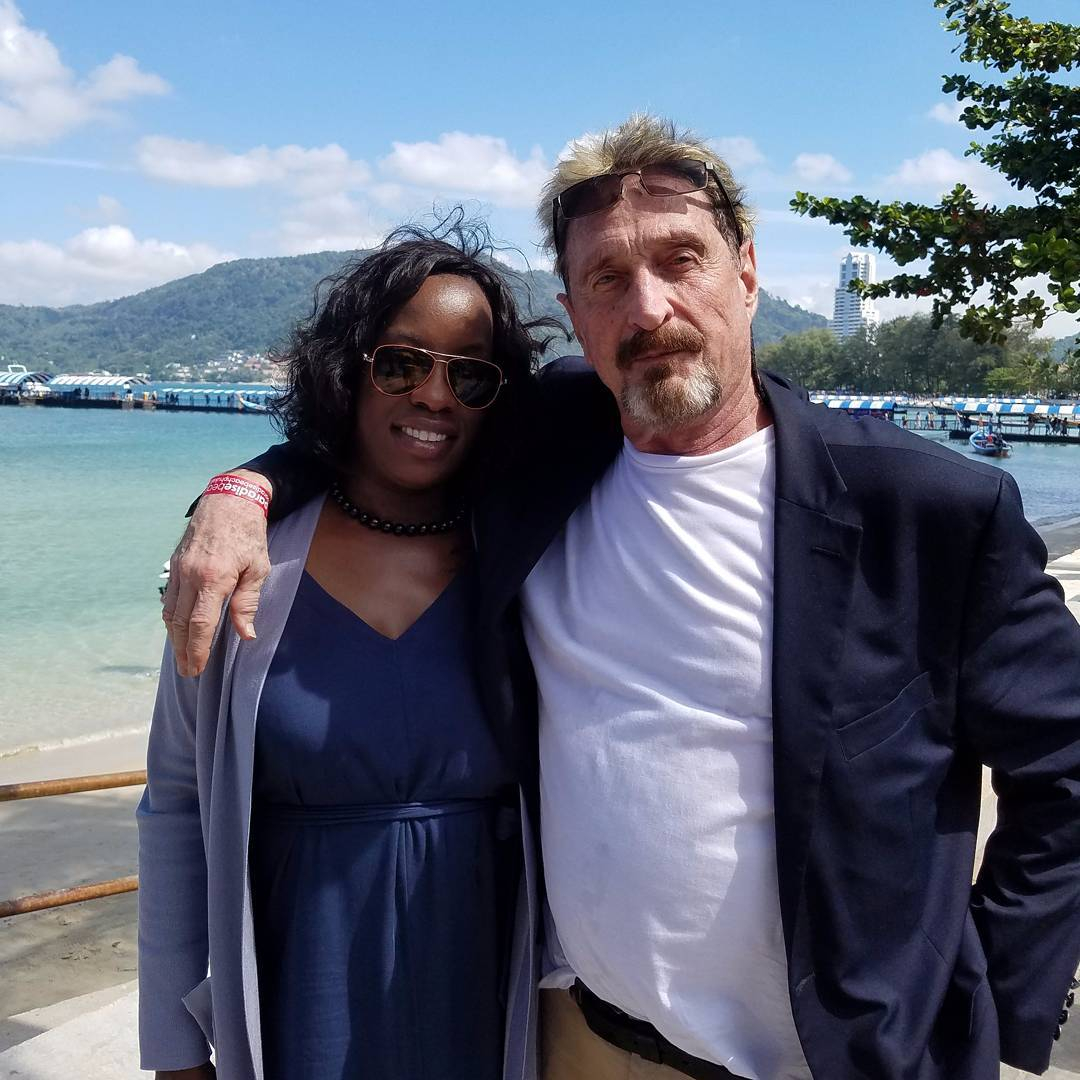 People rumoured about Janice’s involvement in the kidnap plan of John McAfee. Sources say she collided with her former associate, Delmariea Kamani Crutchfield, to rob and kidnap him. Though they prepared well for their plan, in the end, McAfee’s ample security had him covered and protected.

Dyson, after that, pointed out that she never got involved in the kidnapping plan and further explained that instead, she tried to protect McAfee by giving him hints. After they married, Dyson spoke of how grateful she was to McAfee because he saved her from the violent pimp and sex trafficking.

In an interview with someone, he said, “It was, I don’t know how to say it, magical- cause he saw the hurt there.” She also said that “He thought I was worthy enough of a second chance”. Furthermore, her husband John also said, ‘I instantly saw what I had been looking for my entire life in Janice.

The Police arrested Her husband, John. On 3 October 2020, the Spanish Police took McAfee into their custody at the Barcelona International Airport before boarding a flight to Istanbul. While on the run from murder accusations in Belize, where authorities tried to implicate him over the murder of his 54-year-old next-door neighbour Gregory Faull in 2012.

At that time, the judge ordered McAfee should be kept in jail while they awaited the aftermath of a hearing on the extradition. The law and authorities found him wanting for tax-related crime charges, which carried a prison sentence of up to 30 years. Janice also appeared to be quite uncomfortable about his detention. On 14 December 2020, Janice shared a tweet mentioning that she’ll continue to fight for his freedom. In the tweet, she also wrote, “I don’t recognize the girl I was when we first met, but I love the woman I’m becoming.”

The Mossos d’Esquadra, the police force, confirmed a report in El Paris on Wednesday, 23 June 2021, confirming that McAfee died in prison. The prison security discovered McAfee’s body in jail. Although the prison officers and medics did their best to save his life, unfortunately, he didn’t make it. The deadly incident occurred just a few hours after the country’s national court approved his extradition to the US. The judicial staff dispatched investigators to the prison, and investigations started immediately.

We still don’t know the cause of John’s death. Although many believe he committed suicide, others believe that someone masterminded the murder. However, Following his tweets before his death, on 10 June 2021, Milton shared a tweet defining his life in jail. He tweeted,

“There is much sorrow in prison, disguised as hostility. The sorrow is visible even in the angriest face. I’m old and content with food and a bed but for the young, prison is a horror- a reflection of the mind of those who conceived them”.

He tweeted again on 16 June 2021, saying, “The US believes I have hidden crypto. I wish I did, but it has dissolved through the many hands of Team McAfee (your belief is not required), and my remaining assets are all seized. My friends evaporated through fear of association. I have nothing. Yet, I regret nothing.”

However, Janice believes that John has always steadfastly upheld his innocence. She alleges that he is the victim of a conspiracy by the Belizean government, which she believes is governed by the Sinaloa alliance.

Janice Dyson’s net worth is presently under review and is therefore unavailable. However, she gathered a massive amount of money as the wife of John McAfee, whose net worth at the time of his death rounds up at an estimate of about $4 million.

Following the fact that she has no Wikipedia, there isn’t so much information about her whereabouts. In addition, Janice lives her private life of the media eye. She believes strongly that her husband died of conspiracy and continues to blame the US.

The investigations carried out concerning the death of McAfee concluded that he died by suicide. However, the conspiracy theories that can arise due to his death are still under review.