Kim Kardashian arrives at the Met Gala in New York wearing Marilyn Monroe’s dress in May 2022.

The private museum that owns the iconic dress that Marilyn Monroe wore allowed it to be “damaged permanently” when it lent it to reality Tv star Kim Kardashian for her appearing at the Met Gala extravaganza last month, a Monroe memorabilia collector alleged Wednesday.

A platinum blonde Kardashian shined but stirred controversy when she donned Monroe’s stunning skintight gown in 1962 to sing “Happy Birthday, Mr. President” to John F Kennedy. Scott Fortner, a collector who operates a website dedicated entirely to Monroe, released online before and after photos of the crystal-studded cream gown this week.

The after shots were taken by a friend of Fortner, who saw the dress on display Sunday at curiosity museum Ripley’s Believe It or Not! in Los Angeles, which owns the dress and had allowed Kardashian to wear it. 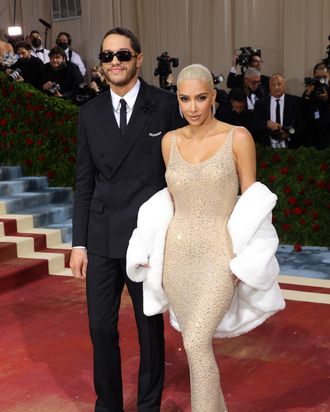 The comparison shots seem to show small tears in the fabric near hooks that fastened the dress together, missing crystals, and others hanging by a thread. The alleged damage to the gown, which Ripley’s bought at auction for a record $4.8 million, has drawn widespread criticism on social media in recent days.

In an update published on his Instagram account on Wednesday, Fortner stated, “I blame Ripley’s, as they allowed the dress to be worn.”

“I feel that any and every celebrity offered a chance to wear this garment very likely would jump at the opportunity,” he said. “There’s a reason someone would want to wear it. Kim K. just happened to be the one who got to do it.”

“It’s now permanently damaged, and likely would have been damaged regardless of who wore it,” Fortner said.

Asked by AFP about the accusations, Ripley did not respond Wednesday afternoon. In early May, Ripley’s trumpeted the opportunity for Kardashian to wear the dress.

“Great care was taken to preserve this piece of history. With input from garment conservationists, appraisers, archivists, and insurance, the garment’s condition was a top priority,” the company said.

Kardashian, who reportedly went on a significant diet to be able to squeeze into the legendary garment, did not respond to the allegations on her social networks.

You may also like to read our recent articles, Jaelyn Crooks Get Lashed For Viral Racial Comment Video