Victoria Waldrip, also known as Woah Vicky, was born on 7 March 2000 in Atlanta, Georgia, United States. She is an American YouTuber, an Instagramer, a rapper, a social media star, and a singer. In 2017 Vicky gained ill fame when she used the N-word word in some of her videos and claimed that she was Black. Also, she became famous for her clash with a rapper and media personality, Bhad Bhabie.

Woah Vicky was born in Atlanta, Georgia, USA but grew up in different places such as Georgia, Marietta, and Hiram. She schooled in Marietta High School, but she later dropped out of school and was homeschooled. She was homeschooled by her father while working as a hostess in a food restaurant. After some time, she quit her job because she did not like being bossed around. She finished high school through the online Penn Foster High School Program. In addition, she went to a private long-distance learning institution. Right from when she was a teenager, she had been active on social media and wanted to be treated like a celebrity. 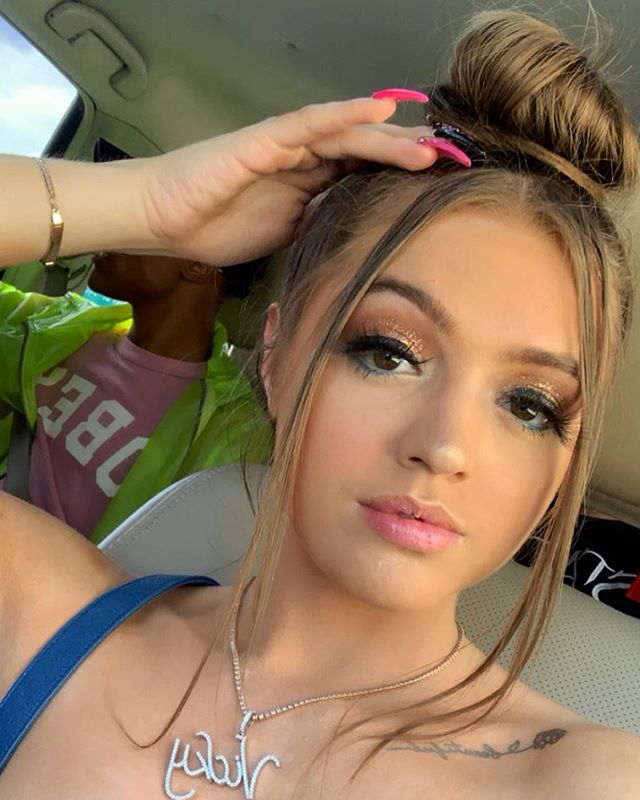 Vicky began her career as a hostess in a food restaurant. Then subsequently, on her Instagram profile, she started sharing vivid pictures of herself dressed in fancy clothes, luxury brands with high-end cars, which made her famous. Her fans used to call her “disgusting Vicky,” but her unique and hysterical contents made her famous.

But then, her fortune ensued when rapper Snoop Dogg posted one of her videos on his social media. Then other rappers like Chief Keef and Plies shared her videos which led to more ill fame. When she realized that her followers were rapidly growing, she decided to take her content to YouTube to reach others maximally. How to twerk and My ancestry story are some of her most popular videos.

Her social life alone didn’t just boost her number of followers, but her controversial statements also increased the number of her followers on Instagram. Frequently, she posts short videos and photos dispensing her beliefs regarding several aspects of women’s life and modern Americans. These videos also received many ratings. She is not just a social media star but also a singer. She started her rap career and wanted to establish herself as a rapper when she was inspired by the great rapper Cardi B. She released her first single titled Woah Vicky on 13 March 2018. Meanwhile, one of her singles, “Ricegum diss track” received negative responses, so she deleted it.

She has been consistently giving her audience her singles from 2018 to date, consecutively. Focusing on her rapping career, she released her latest solo rap song titled Like Me on 30 April 2021.

Vicky wears catchy and attractive clothes and also loves being stylish. Since she likes to live a glamorous life, she chose Instagram to showcase and express herself. She posts alluring pictures of her putting on popular brands such as Gucci and others. People like to follow her on Instagram because of her interesting content, such as pranks, memes, challenge videos (lotion challenge and others), and lovely pictures.

At age 17, she was arrested in 2018 in a shopping mall in North Carolina and was charged for trespassing, resisting, and assault of a law enforcement officer. While she was at the Four Seasons Mall in Greensboro, North Carolina, that Saturday, she caused a disturbance in the mall, which triggered fear and panic. She was told to leave the premises countless times after trespassing, but she refused and assaulted an officer before he handcuffed her. Vicky then went on her Instagram to post that she was arrested because she is a racist. Then she started posting pictures with the hashtag #blacklivesmatter. Her boyfriend JJ was also arrested that day because he got into an argument with the police. In the arrest process, he incurred a broken nose and was taken to the hospital after his release.

When he and Vicky were released, they both made a video with the caption, “We out #f_ck12 #blacklivesmatter, f_ck @cityofgreensboro, f_ck #greensboropolicedepartment f_ck all them they racists asf and dumb asf!”

YouTube once flagged and removed one of her racially-charged diss tracks. She claimed that she was attacked for being a racist cause she claimed to be Black and adopted African-American culture. Nonetheless, her upbringing shows that she grew up privileged, but she made people believe that she ‘grew up in the hood’ and ‘came from nothing,’ which is appalling.

Vicky once fought with Danielle Bregoli, widely known as Bhad Bhabie, which attracted a lot of attention. In 2017 Danielle Bregoli fought with her mother, which made her popular. She then used her popularity to build her rap career. In October 2019, Victoria and Danielle coincidentally met in a studio to record a song and had a physical fight. Someone recorded the video, and the part where Vicky pinned down Danielle went viral.

Initially, she was dating Virgin JJ for three (3) years, and he was her first relationship that was open on social media. They both appeared together on social media and YouTube vlogs. The duo then was seen posting videos and pictures of a toy they called their baby but did not have any real baby though. They started dating in 2017 but called it off early 2020, and they both went their different ways. However, they wished each other well and were still on good terms. Though they still collaborate on their vlogs.

Presently, she is in a relationship with Deivys Nicola, also known as D Rock, an Instagram personality who is also into music. 17 March 2020, through Vicky’s YouTube channel, they made their relationship public. After that, they continued posting about each other on their social media. The duo is active on social media but has not been opening up on their relationship.

Steve Waldrip and Carl Johnson are Victoria’s parents; they are from Marietta, Georgia but are currently based where Victoria lives, Atlanta. Her father, Steve, was born and brought up in Orange Country, California. He is from a family of 6; 5 brothers and a sister. He graduated from the University of Georgia in 1977, where he studied business administration.

He started a career in sales and software before joining his father’s line of business. His father was into the homebuilding business. Woah Vicky’s father established Founded Homes in 1986, and presently he is the CEO of the construction company; the company builds homes while conserving and maximizing the local aesthetic. He is also a philanthropist who has been a long-term sponsor of Cobb Landmarks and Historical Association which is dedicated to the preservation of local historic sites.
Among his other roles, he served on the executive board of the Cobb County Home Builders Association.

He met his wife, Carl, when he was in Law School at the University of Utah. He helped her out with her load the day she arrived cause she was staying with his friend. In his second year of law school, he married his wife and was living in salt lake. Presently he is into the home building and real estate business. Her mother is on a low-key on social media, with not so much happening around her life.

Stephanie Waldrip is Victoria’s elder sister with about ten years age difference. Stephanie was born on 4 April 1987 in Georgia. Her zodiac sign, according to astrologers, is Aries. She graduated from Savannah College of Art and Design. She is a fashion designer. She got married to her husband, Blake London, in 2016, and they have a daughter. She runs her design label, “Waldrip NYC,” well known for its jet-inspired look and innovative silhouettes. In 2019, Lucky Magazine featured her brand. Then she had a degree in design SCAD. She is among the list of most popular fashion designers and celebrities born in Georgia.

Before becoming famous, she worked as a design assistant in New York City. Her net worth is about $1.5M. Due to the age difference between Stephanie and Victoria, they are not close. Stephanie’s professional Instagram is inactive, although her personal Instagram has so many adorable photos of her husband and daughter.

Vicky has been arrested for assault; in a recent interview, she talked about her lack of relationship with Bhad Bhabie, aka Danielle Bregoli, and her potential relationship with Tyga. Although when it comes to Bhad Bhabie, she blames it all on jealousy. She admired Tyga but was doubtful at the same time and mentioned that if she ever gets to enter a relationship, it might just be for showoff.

Vicky is a self-made millionaire. Irrespective of her young age, she has a net worth of about $1M. Vicky gets her income from paid partnerships, paid posts on Instagram, and ads on YouTube. And a lot of sponsors and companies are willing to showcase and release products in her name.

Woah Vicky is a young lady who posts short videos and photos dispensing her beliefs regarding several aspects of women’s life and modern Americans, she also posts memes and pranks on her social media handles. Although there are a lot of controversies around her life, she keeps making progress; also, most of her fans find her disgusting but they can’t help but engage her contents.

7 thoughts on “Revealed!!! Why Woah Vicky became famous on Instagram”