Taylor Swift height has become a famous search term on the internet and inquiries into just how tall the pop singer is continues to pour in by the thousands every month. Clearly, Swift is not the tallest musician, neither is she the shortest. However, what makes this physical aspect of her so interesting likely has to do with the several photos of her standing beside other stars.

Taylor Swift and Bruno Mars photo height difference, exaggerated by how the camera was placed, is one of the most famous media in that category. But there is more. Here, let’s take a look at some quick facts about Taylor Swift height.

How tall is Taylor Swift?

Several sources list Taylor Swift height to be around 1.8m, 180cm or 5’10”. However, with her love for heels, the singer sometimes appear to be much taller. The height difference between her and other celebrities is often clearer when they appear all glammed up on the red carpet or on stage. However, the singer has said that she does like the fact that she is so tall, unlike when she was much younger.

“I didn’t like being tall when I would walk up to a group of girls, and they were all a head shorter than me. When I can put on a pair of four-inch heels and walk into a room and be taller than everybody else, now I look at it as a good thing.”

Her height is likely why you rarely see her modeling for brands. This rarity was why her 2013 runway appearance for Victoria Secret was such a big deal. She had won a black lingerie piece and a light pink nightgown while performing “Blank Space” on the runway. To further clarify just how tall Taylor Swift is, let us pit her against some celebrities she has appeared beside and compare their heights:

Photos of Taylor Swift height compared to other singers

Bruno Mars height is recorded as 1.65m (5’5″) and standing beside Taylor Swift did him no favors. Although, the camera angle further contributed to the difference, he stood no chance. This picture is a meme that has been running for several years. 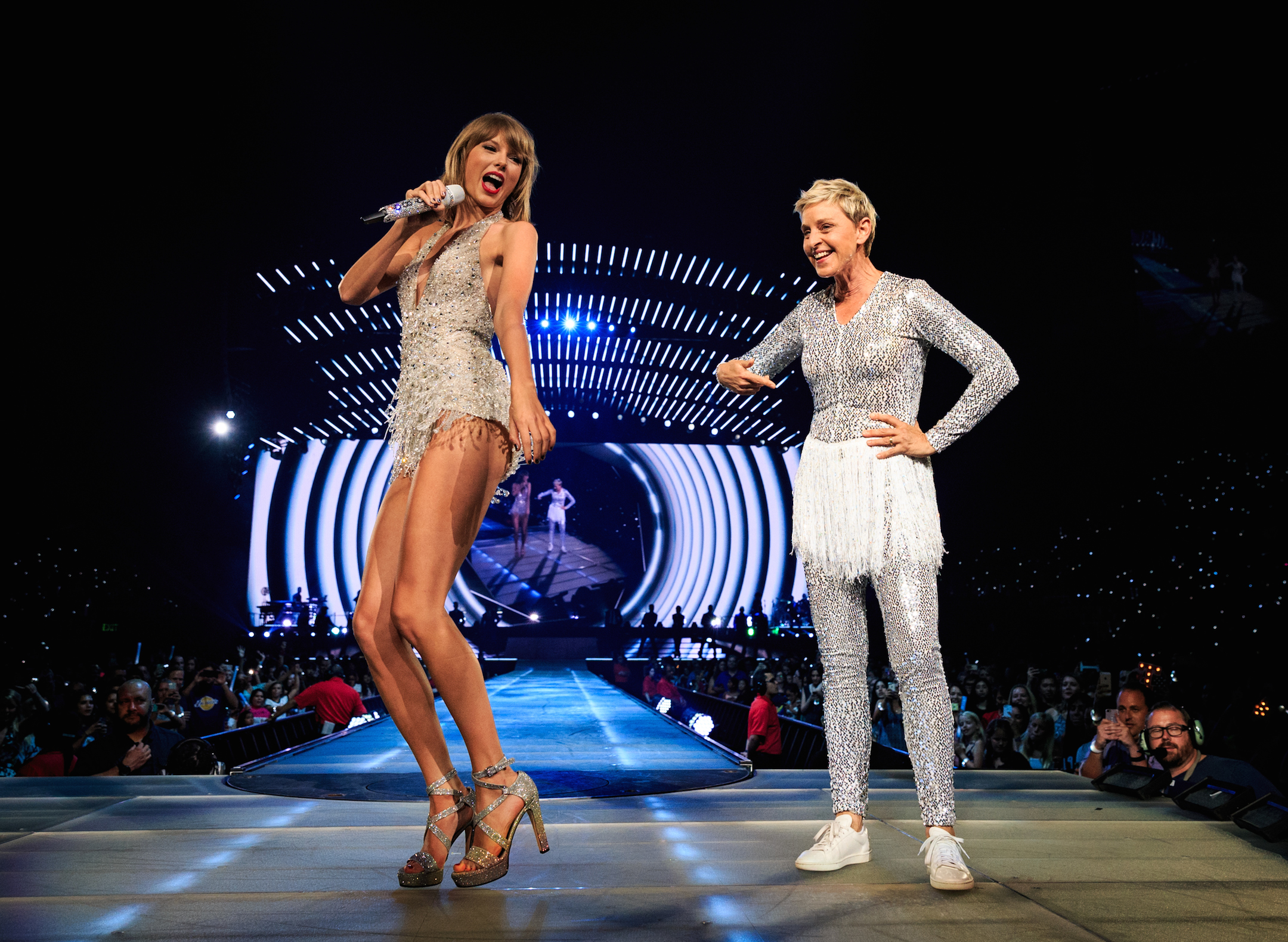 Ellen DeGeneres is not so short, and would hold her own against a lot of celebrities. However, the picture above is not so flattering because she wore a flat while the already tall Swift was in heels. The comparison is merciless and shows what a difference it makes when the singer is in heels. Oh! Ellen is 1.71m tall, in case you were wondering. 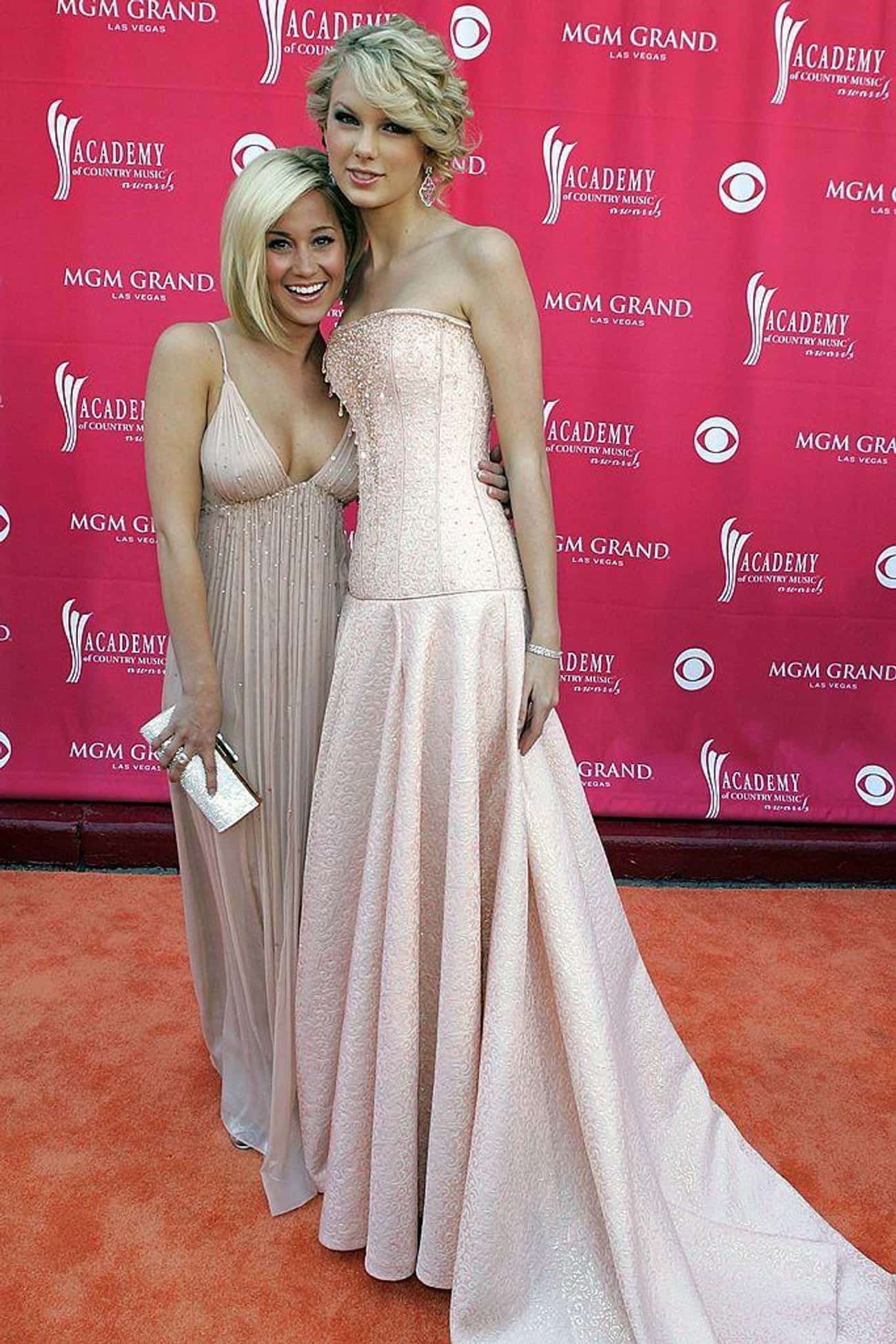 In the photo above, Taylor Swift is made to stand in front of Kellie Pickler, who is also wearing heels. Yet, despite adding a slight slouch while hugging Pickler, the “Look What You Made Me Do” singer still towers over her. Kellie Pickler is even shorter than Bruno Mars (in the first picture), standing at 1.55m but you can see what difference camera angle and positioning does. 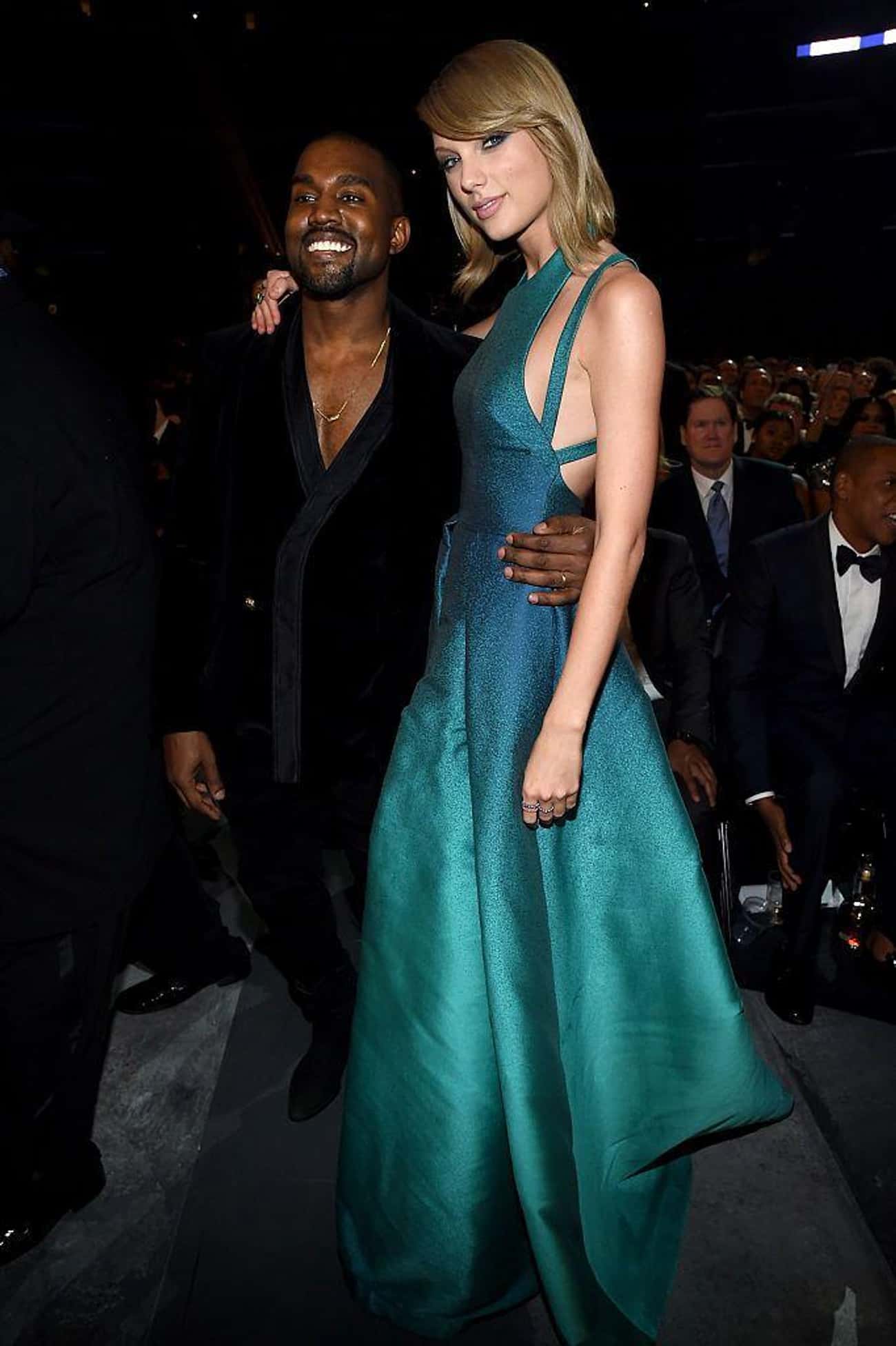 Kanye West is 5ft 8inches or 172m tall, yet, even he looks kind of small standing beside Taylor Swift in all her glory. These two have had a stromy relationship since West interrupted her speech to say Beyonce deserved the award more and then he released a song titled “Famous”, dissing her. 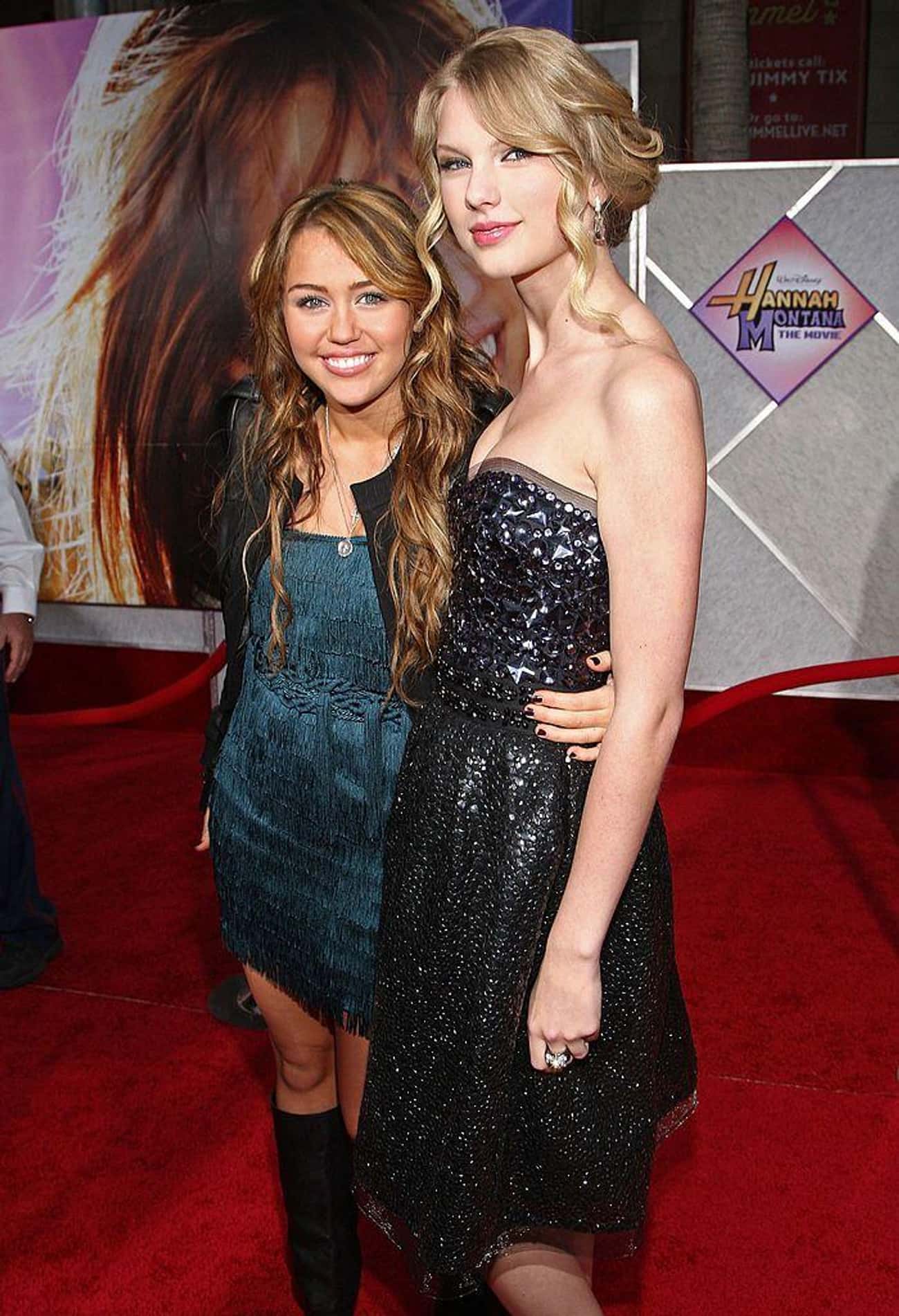 Miley Cyrus looks like she just got of the set for Hannah Montana in this photo, thanks to Taylor Swift’s ability to make anyone look small. Cyrus is 1.65 inches tall but the “Bad Blood” crooner’s height does not care. 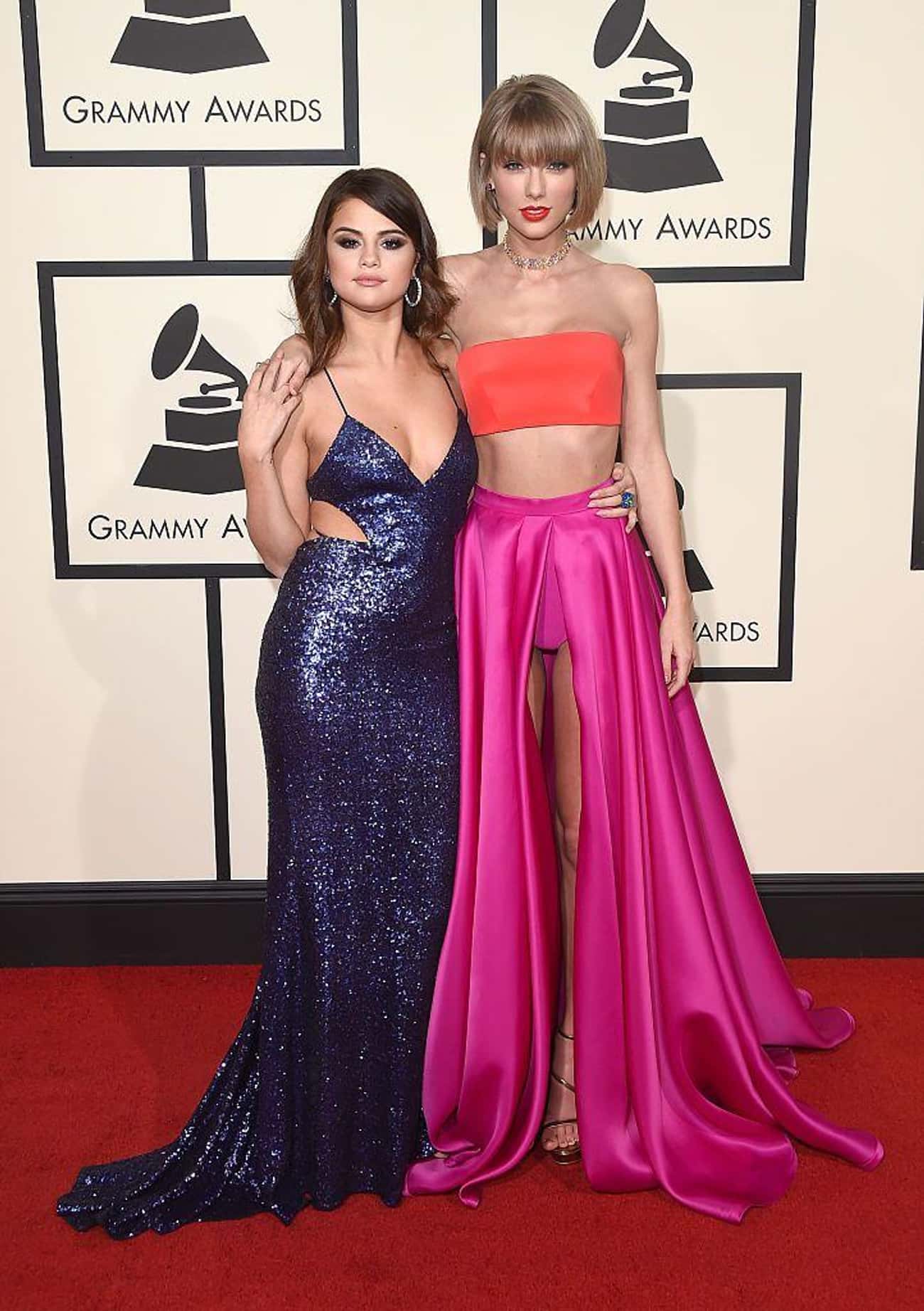 Selena Gomez and Taylor Swift became close after they both dated the Jonas brother duo around the same time. While their respective relationships crashed, the women stuck together. Many fans are used to seeing them together and their height difference no longer stands out much. However, Swift is nearly half a foot taller than Selena and it shows when they stand should-to-shoulder like the picture above. 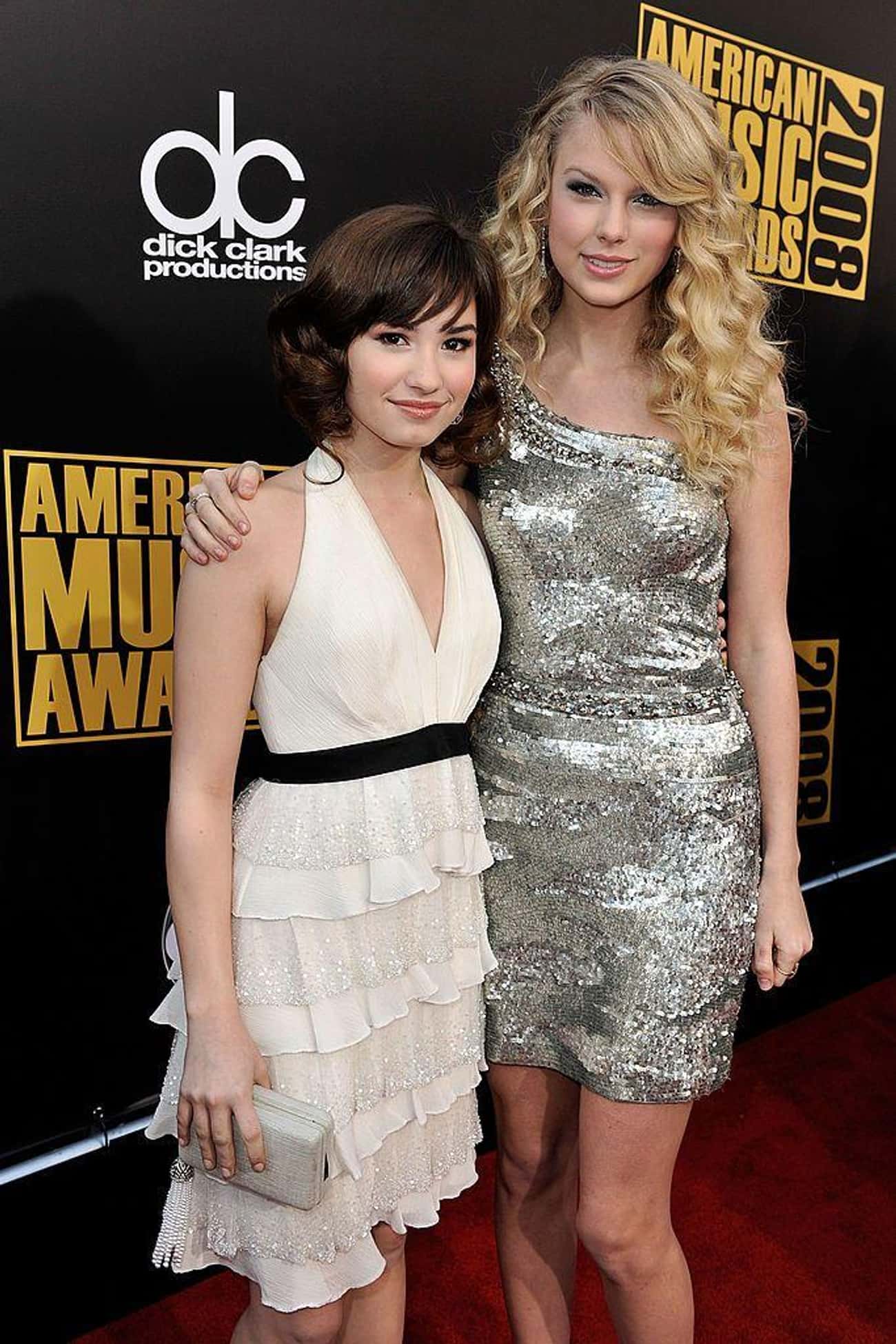 At 1.61m, Demi Lovato is several inches shorter than Taylor Swift and it makes the “Love Story” singer look a lot taller than she really is. 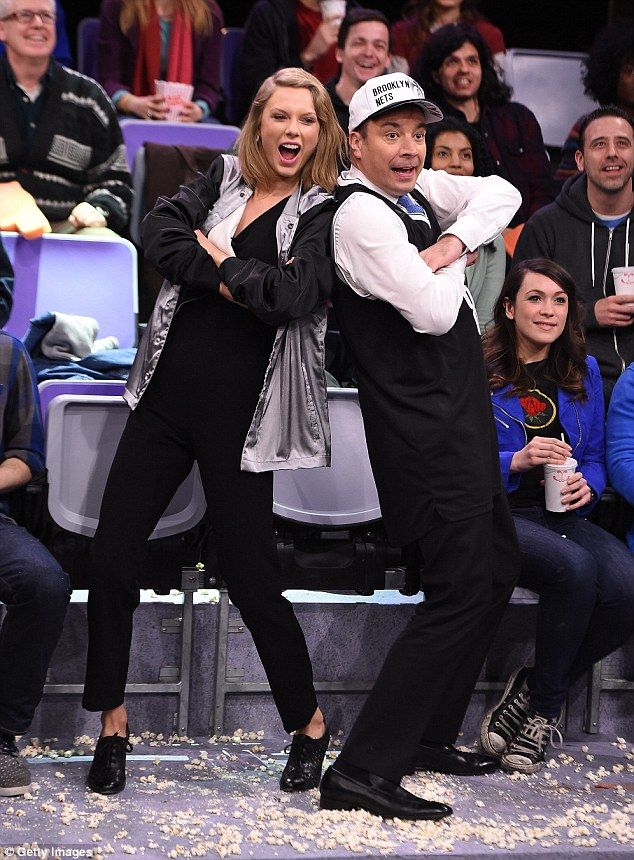 Finally, here is another celeb who holds his own against miss Swift. Jimmy Fallon is slightly even taller than her, standing at an impressive 1.83m. However, when the singer pairs her height and heels, even Fallon looks a bit shorter than her. Considering that Jimmy Fallon is one of the tallest TV personalities around, Swift’s power is really unmatched.

Jake Gyllenhaal is one of Taylor’s famous exes, although they allegedly only dated for about three months. He is one of the tallest actors in Hollywood. Gyllenhaal is nearly the same height with Taylor Swift (at 181cm). Here, Taylor is finally wearing flats, after ditching her iconic heels. Yet, standing beside the 1.55m tall Cher Lloyd makes her look like a giant. There are only a few women in the music industry taller than Taylor Swift and none of them can make her look like a child the she does.

The singer is facing a lawsuit over her Lover book, which she released in 2019 alongside her album of the same name. E! Online reports that author Teresa La Dart claimed Swift copied “design and textual elements” from her own 2010 book. After selling 2.9 million copies in the US, Dart’s lawyers say that the author requires payment of one million dollars.

Also, the singer was recently involved in a scandal that saw her receive criticisms over global warning. It was alleged that she frequently flew her private jet for trips as short as 5 minutes, contributing to over 8,000 tonnes of carbon pollution in 2022. However, her spokesperson said that the singer loans out the jet frequently and the claim of her carbon imprint is outrageous.

There is also the news that the director of The Twilight Saga: New Moon, rejected her cameo offer, and now regrets it.

Taylor Swift height is a hot topic and you can already see why. It takes nothing away from the achievements she has attained over the course of her career.